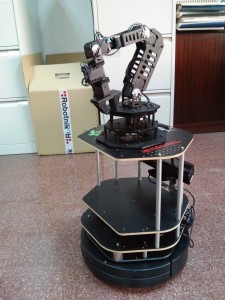 The CRUMB research project (Cognitive-Robotics-sUpporting Mobile Base) was initially funded by the University of Málaga officially from May 25, 2015, during 1 year, associated to the regional project TEP-2279 of the Andalusian Government. The University funding covered the acquisition of the robot (4.000 EUR). After that we have continued populating this site with results regarding the CRUMB robot obtained beyond that temporal scope, including other research projects.

The main goal of the CRUMB ecosystem is to offer a software/hardware low-cost mobile manipulator robotic platform that serves to implement several lines of research on cognitive robotics. Most part of the project in its initial time frame dealt with setting up both the software and hardware of the robot and implementing tools that boost future research. After that, we are advancing in implementing diverse cognitive processes and doing further research.

You can e-mail to: