Difference between revisions of "Architecture:Brief discussion of the model"

We propose here a layered architecture model for the low-level modules of robotics applications. Our model consists of two well-differentiated parts: a hardware abstraction layer (for accessing hardware devices and sensor by their functions, instead of addressing particular devices), and two layers of mid-level modules related to sensory data processing and actuators control. The first layer is inspired on successful similar ideas found in designs like the Windows internal drivers model [4] or in the Internet protocols stack [5]. The hierarchy is strictly observed for modules in this layer, i.e. they are not related to any other module on the same layer. However, modules in the second and third layer will usually be connected to many modules in the layer, thus they are closer to an agent-based architecture.

In the case of our robotics software architecture, low abstraction-level modules can be roughly classified into two groups:

However, this distinction is not enough for developing anything else but trivial systems with a few modules. From our previous experience we highlight some typical problems:

Taking into account the previous remarks, we discuss the overall structure of the proposed model, shown in Fig. 1. It can be seen how high-level modules are not addressed and appear as clients of the presented software model. We define three well-differentiated layers and an independent module:

Notice that the revision beta 0.4 of this report greatly simplifies some issues of the module architecture to allow it to be implemented under the latest version of BABEL (Feb-2007) without any modification.

In the case of the actuators modules stack, the process is inspired in the ACHRIN’s functional groups [2]. In the proposed model, high-level modules request the execution of actions and then they can track the execution process to determinate when actions are finished or errors occur. Actions can also be suspended and then be resumed later, or even totally canceled. Actions can also produce any desired amount of data as an execution result, therefore informing of execution results or the error reasons. 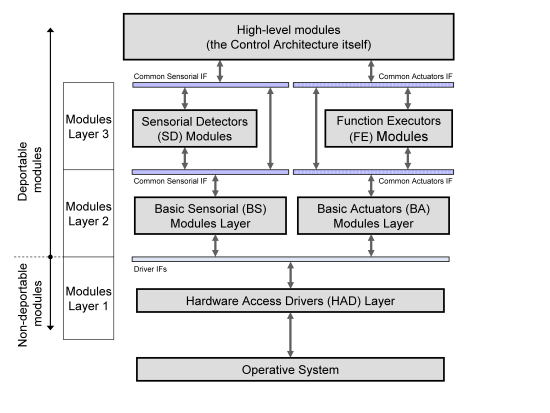 Fig. 1 The proposed structure for low-level modules is divided in three layers, with normalized interfaces between them. The interfaces for accessing modules of the same type (sensory and actuators modules) are the same in spite of they belonging to the second or the third layer. However, layer 3 is composed of modules with some degree of data processing, while layer 2 modules act mostly as unified interfaces to hardware devices in a platform-independent way. Notice that only layer 1 modules are required to be physically onboard the robot.